Blend -100% Muscat. The wine is allowed to ferment to approx. 2%vol before it is stopped with the addition of grape spirit. The resultant wine is blended into a solera system to maintain a consistant house style when combined with wines from previous vintages. This Rutherglen Muscat contains portions from a number of vintages over five or so years.

Producer - Campbells produces some of the world's finest dessert wines. This family-owned vineyard and winery uses the "solera" method of blending and maturing new and old wines over a period of years. (Some of the material used for blending is 70, 80, even 90 years old.) The solera, originally made famous by the Spanish and Portuguese, is a series of up to seven casks, each containing wine at successive stages of maturation. The result is a uniformity of quality, age and character that elevates the Campbells brand into a class of its own. Today, when you see the Rutherglen symbol on a bottle of wine, you have a virtual seal-of-authority that it will be very special.
With a 130-year history of winemaking, the fourth generation of Campbells own and manage the vineyards and winery at Rutherglen. The founder of the winery was a Scottish immigrant, John Campbell, who arrived in 1860. A decade later, he began making fortified wines that rivaled the best Europe had to offer. The family still uses the same winemaking methods handed down over successive generations, while incorporating modern viticultural technology. The vineyard now consists of 157 acres, and many of the vines are a century old. Malcolm Campbell is in charge of the family vineyards and farmlands, and his brother Colin is responsible for making the wines 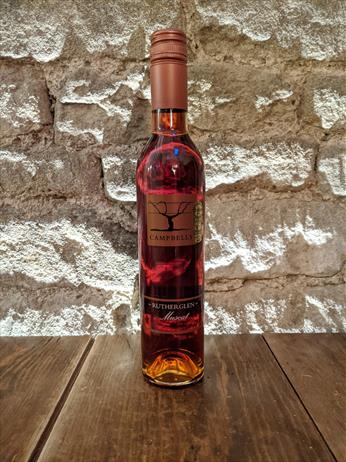