Dry fruit, date, plum and marzipane.Tastes of sweet and rich dry fruits and plum flavours with a dry finish. Drink with an ice cube to release the marzipan.

Blend - Shiraume Umeshu is made by preserving Chinese plums in the finest of Japanese sakes. Akashi Tai Shiraume Ginjo Umeshu is made using only premium ginjo Sake made from Yamada Nishiki rice. The plums are macerated for 6 months in the Ginjo Sake before they are removed. A small amount of sugar is added for sweetening. The resulting Shiruame Umeshu is left to aged for a further 2 years prior to release.

Producer - The Akashi-Tai Sake Brewery began sake production in 1886 in the town of Akashi which is one of the major fishing ports in the west of Japan. It is named Akashi after the town and Tai after the sea bream, called Tai in Japanese, that the region is famous. It is the sea bream that adorns Akashi’s labels. Through the years Akashi has modernised and expanded to sell a wide variety of products from premium sakes to varieties of distilled spirit shochu but still remains a small artisanal brewery or “kura”. 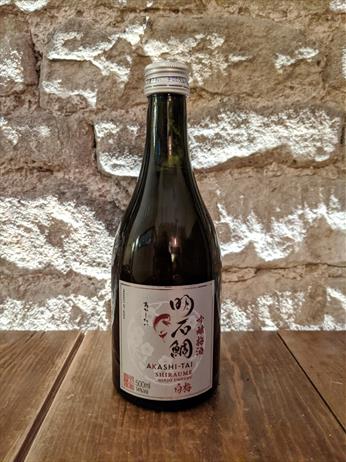